The official release of the Realme C30s in India has been set for September 14 at noon. In addition, the official company website now features a landing page exclusively for the forthcoming phone, which highlights some of its features. The Realme C30s’s screen measures in at 6.5 inches and packs 16.7 million colors and an impressive 88.7 percent screen-to-body ratio. The homepage claims that an unnamed octa-core SoC will drive the device. The Realme C30, powered by an octa-core Unisoc T612 SoC, made its debut in India in June.

The Realme C30s, produced by the Shenzhen-based company, will debut in the Indian market on September 14 at 12 p.m. (noon). In India and other South Asian countries, you may buy the phone from online retailer Flipkart. In addition, the official Realme website now features a landing page exclusively for the Realme C30s. Some of the phone’s features are confirmed on the main page. 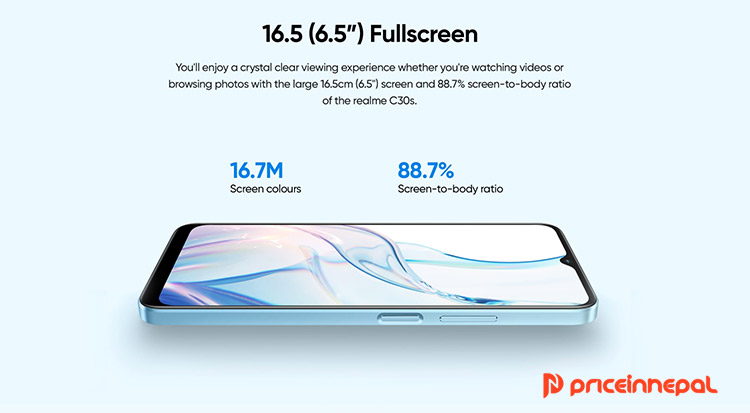 According to the landing page, the Realme C30s will have a 6.5-inch screen with 16.7 million colors and a screen-to-body ratio of 88.7 percent. Unknown octa-core system-on-chip (SoC) will provide the juice for this phone. It has a 5,000 mAh battery and a fingerprint scanner on the side for added security. The forthcoming smartphone from Realme would supposedly unlock with “only a touch” of the fingerprint sensor in under a second.

Similar aesthetic choices were made when designing the Realme C30s home page. The phone will have one camera on the back, illuminated by an LED flash. The front-facing camera is widely speculated to be located within a notch resembling a water drop. It has a fingerprint scanner on the right spine, and volume controls on the spine’s far right. The phone, complete with SIM card slot, is depicted on the left spine.

According to the dedicated webpage, the 3.5mm audio jack, microphone, USB Type-C connector, and speaker grille can all be found in the device’s base. At launch, you’ll be able to purchase a Realme C30s in either Black or Blue. There is currently no information regarding the smartphone’s price in India from the manufacturer.